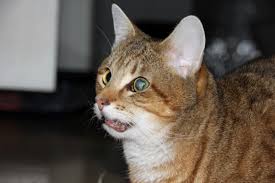 Cataract is a disease in the eye characterized by the accumulation of protein on the lens of the eyeball. The protein interferes with the vision of the pet. Cats are often afflicted with this disease however though it is called CAT-aracts there are more cases of dog cataracts than cat cataracts. Vets just assume that dogs are just more vulnerable and may overlook this in your feline.

There are three known causes of cataracts.

1. Heredity – Genetic traits play a major role on whether a pet will have cataracts or not. It has been discovered, lucky for us cat lovers, that some breeds of dogs are especially prone to suffer from cataracts. Some of these are:

2. Diabetes – The increased levels of blood sugars and the decreased concentration of insulin in the body can make your cat more susceptible to cataracts.

3. Old age – A kind of cataract occurs when a pet enters old age. This specific condition is known as lenticular or nuclear sclerosis. Such is a normal phenomena that happens to old eye lenses.

Veterinarians can easily diagnose the presence of cataracts by using an artificial source of light. This light is shown directly into the eyeball of the pet. With such direct light, the accumulated protein can be easily detected.

With nuclear sclerosis, however, using the direct light is useless. That is, the type of protein that condenses on the center of the lens is invisible. Ironically, such accumulated proteins can be seen by the naked eye as a thin whitish film covering the eyeball. Fortunately, the nuclear sclerosis does not effectively block the vision of the pet. This means that the cataracts which need treatment are those that happen due to the first two causes, heredity and diabetes.

There are two types of approaches in treating cataracts. The first utilizes medications. And the second involves surgery. Sometimes, the vet will tell the pet owner that no treatment will be administered or needed. This option is often taken when, after examination, the cataract is found to be too small, or affects only one of the eyes.

Utilizing medications is done when the vet discovers the cataract to be blocking one or both eyes of your cat. Medications typically refer to the use of eye drops or the application of ointments. Both eye drops and ointments have the same action. They dilate the pupil.

This central part of the eye is the one responsible for controlling the amount of light that comes inside the eye. Normally, the pupil dilates when the environment is dark, and it contracts when the surroundings are bright.

With the presence of cataract, the pupil must be dilated so that the eye your cat can see around the cataract. The vision may no longer be as sharp or perfect as before, but better than having no vision at all.

A surgical operations involves the physical removal of the cataract, and, sometimes, the replacement of the lens. This is done by a licensed ophthalmologist because the vet’s training is not enough to perform such procedure. Some cats adapt well to the new lens while others show irritation. When the latter occurs, the pet owner should again consult the vet.

Medication for Cats with Hypertension